Humus (stabilized organic matter): This pool of SOM is resistant to biological degradation because it is either physically (e.g., lignins contained in woody biomass) or chemically (e.g., humic acids) less accessible to microbial activity. These compounds are more complex than fresh POM -- created through a combination of biological activity and chemical reactions in the soil. Humus is a critical component for the long term sustainability of a soils ability to provide plant nutrients, especially nitrogen[3]. Compared to the short half-life of POM, transitional humus can last in soils for years, with highly stable humus lasting up to centuries.

SOM Functions; The functions of SOM can be broadly classified into three groups: Biological, Physical and Chemical. These groups are not static entities and dynamic interactions occur between these three major components.

It is widely recognized that SOM plays an important role in soil biological (provision of substrate and nutrients for microbes), chemical (buffering and pH changes) and physical (stabilization of soil structure) properties. In fact, these properties, along with soil organic carbon (SOC), N and P, are considered critical indicators for the health and quality of the soil.

Raising the Red Flag: A very significant obstacle in understanding clay settling area soils and developing reclamation/soil building techniques is their uniqueness compared to agriculture soils (where the body of soil science research has been performed). However, for typical clay settling area soils having SOC of ~0.5% (SOM content of ~1%) a red flag should be clearly apparent.

We believe that any CSA research, reclamation practice, or Regulation based on the postulate that CSA soils are "ready to go" after hydrology (drainage) efforts is an incomplete approach. While hydrology (drainage) is certainly an important factor in reclamation, soil science is quite clear that the resulting crusting is an indicator of poor soil health. Rather, a "bridge" is needed to repair the "damaged or incomplete" soil characteristics:

Simply stated, if sustainable OM management can be achieved on CSAs -- end-use environmental (native flora and trees) and/or agriculture (high-value crops) applications will be greatly enhanced.

In achieving this goal for OM management on what might eventually be over 225 square miles of CSA mined lands in Florida, we might also be surprised on what can be accomplished on other issues such as carbon sequestration (Global Warming), water quality (filtration and capture of nitrogen, phosphorus, and particulates), controlling invasive plants (e.g., cogongrass, Brazilian Pepper, Soda Apple, etc.) renewable energy (fuel crops for electricity production, ethanol, biodiesel), and rural economic development -- creating value-added benefits which have quantifiable economic value (e.g., selling carbon credits).

Field Observations: In understanding the critical role of SOM in repairing clay settling area soils, its important to recognize that different groups, proportions of SOM, and even types of plants/residues (e.g., sources high in lignin content) achieve different soil functions. For example, while POM provides the critical energy component for microbial activity in all soil types, humus accumulation is much more critical in creating soil stability in clay soils compared to sandy soils. 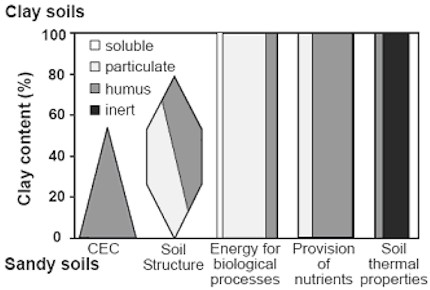 The following discussion is an "attempt" to explain and possibly link field observations that we've seen on our clay settling area treefarm in Lakeland, Florida to soil science theory.

Soil Organic Carbon (SOC): One "bridge crop" approach used is high density tree planting (up to 4,000 trees per acre) of fast growing non-invasive Eucalyptus Grandis and Cottonwoods. Based on field research, ~10 tons of OM per acre, per year is being introduced into the heavy clays via the trees' root system using this specific "bridge crop" approach.[6]

As previously stated, it is believed that post mining clay settling areas have typical SOC levels of ~0.5% (1.0% SOM). However, over a three year period since initial high density tree planting, dramatic changes in the clay have been observed. Soil color and texture has changed from pre-existing conditions of gray and plasticity to porous granulated dark soils ~4 feet in depth on treebeds. Soil analysis performed by the U.S. Department of Energy's Oak Ridge National Lab validates this observation:

Also, in comparing control areas (where no trees had been planted), nitrogen content has increased an amazing 1,150% during this 3 year period.

It is uncertain what this threshold level is, but this observation raises questions on Florida Department of Environmental Protection (FDEP) mining reclamation regulations. Under existing Regulations, a minimum level of native trees and flora is required to be established before the CSA can be released. However, with low density per acre tree plantings of usually slow growing natives, it is questionable whether the necessary OM threshold level can be achieved.

This comment is not intended to be critical of Lawmakers or the FDEP, but to raise a seemingly valid question of whether some threshold requirement for OM should be included in Reclamation Regulations.

Soil pH: Soil samples prior to tree planting (or in un-planted areas) reflect a range of soil pH that is slightly alkaline (~7.6) to moderately alkaline (~8.2). This alkalinity is a result of the CSA soils being calcareous with a very high content of calcium carbonate.

In high density tree planting areas, soil pH was reduced to a range of 6.5 to 6.8 in three years. Also, in field research conducted by the University of Florida, approximately 30 native species of flora have now appeared naturally in the tree understory -- where before tree planting, the CSA was a prairie of monoculture cogongrass.

Soil Compaction: A review of soil science literature indicates that clay particles normally lay together flat, but are repelled by the negative charges across their face. Salt (Na+) is present in minor amounts:

When the percentage of clay in the soil is very high, the positive charge on the edge of a clay particle combines with the negative charge on the flat surface of another, forming a tight three-dimensional structure:

As humic acid penetrates compacted clay platelets, it segregates salts (positive ions) and removes them from the clay particle surface. This restores a negative charge to the face of the clay platelets, causing them to repel each other[8] :

As noted earlier, soil compaction has noticeably been reduced on treebeds within high density tree planting areas. It must also be noted that between treebeds (alleys), little or marginal improvement have been observed.

Through a "bridge crop" approach of high density tree plantings, it is believed that: (1) larger soil aggregates are being created via tree root system OM (increasing pore space) and (2) topzone soil is being de-watered by significant water uptake by trees. According to UF, the following soil/ground de-watering rates are occurring per acre per year:

Soil Structure and Soil Stability: Admittedly, soil structure is perhaps one of the most perplexing issues that we've encountered (second only to our inability to eliminate cogongrass). A review of soil science literature suggests that soils with SOC levels of 5% should achieve soil stability. However, while this SOC target was achieved in our specific "bridge crop" approach, CSA soil stability has not resulted. Four years after initial tree planting, soils would still not support farming/harvesting equipment (even using low ground pressure options).

Understanding the components of SOM and their different soil functions may explain that while soil heath has unquestionably improved (color, tilth, drainage, etc.), necessary soil stability has not yet been achieved. Soil science appears to be very clear that soil stability for clays is largely driven by the proportion of the humus fraction in SOC -- much more so than stability in sandy soils.

As the below graph illustrates, as clay content in soils increase, increasing proportions of humus is needed to provide optimal structural support through physical and chemical binding.

In the process of chemical and biological degradation, humus creation and accumulation just takes time. Its important to note that even under the best of conditions, a relatively small amount of humus is created in comparison to the level of OM initially introduced.

However, several potential options appear to be promising in accelerating the time required to achieve soil stability: